Just two years since the initiative was first announced, representatives from E-Comm, government and police agencies gathered to celebrate the opening of the South Island 9-1-1/Police Dispatch Centre on March 6.

The new two-storey, 1,200-square-metre, post-disaster facility in Saanich, built and owned by the Capital Regional District (CRD) and operated by E-Comm, amalgamates 9-1-1 call-answer, police call-taking and dispatch services for the Central Saanich, Oak Bay, Saanich and Victoria police departments and 11 RCMP detachments in the central and southern Vancouver Island region.

More than 100 police, local government representatives, stakeholders and contractors who worked on the building participated in the ceremony, which started off with the Greater Victoria Police Pipe Band leading the speakers to the podium followed by a territorial welcome by Florence Dick of the Songhees Nation.

B.C. Minister of Public Safety and Solicitor General Mike Farnworth praised those who work on the front lines of public safety every day. “Here in this building, we have professional call takers and dispatchers. They are the reassuring voices you hear when you call 9-1-1 and the take-charge, highly-trained people who get you the help you need.”

The CRD invested $13.1 million to build the facility on time and under budget. “The CRD welcomes the opportunity to collaborate with partners to prepare for, respond to and recover from emergencies. This new centre is a strong example of how working together will improve efficiencies and help us to meet post-disaster standards,” said Colin Plant, CRD Board Chair and emcee for the event.

E-Comm President and CEO Oliver Grüter-Andrew said the organization is all about emergency communications.  “All E-Comm staff share a dedication to public safety that makes me incredibly proud. We are ready to continue to serve police officers and Vancouver Island residents to the very best of our ability no matter what the circumstance or time of day.”

The centre began operations in late January, following the successful transition of all police agency call-taking and dispatch operations over a two-week period. An estimated 100,000 9-1-1 calls will be answered each year by the new centre.

E-Comm has been the 9-1-1 answer point for the RDNO and FVRD since 2014 and 2016 respectively. “This expansion of our existing working relationship is a great step to further strengthening public safety in both regions, and I know our fire team will provide the same level of excellent service to these new fire departments as they deliver to all agencies we serve,” said Erin Ramsay, E-Comm vice-president of Operations. “We know the firefighters and citizens of both regional districts are in good hands.”

E-Comm’s experienced fire staff, including call takers and dispatchers, have undergone specific training to learn more about the geography of both regions in order to provide the best emergency response to these new partners and the public. As part of the training, fire call takers and dispatchers learned more about local areas including commonplace names (such as Browns Corner in the RDNO, Vedder Canal and Bear Mountain Trail in the FVRD).  On the technology front, E-Comm worked with staff from both regional districts and the fire departments and computer-aided dispatch (CAD) specialists to prepare for these transitions. This included reviewing all policies and procedures from the fire departments and setting up wireless communication to each of the departments so firefighters on the ground can communicate with E-Comm dispatchers.  E-Comm gathered and loaded data such as locations of schools, community centres and other commonplace names into its computer systems.  Representatives from the fire departments took part in workshops to review maps and policies as part of the transition process.

E-Comm is expected to handle about 20,000 fire calls a year from both regions.  In 2018, E-Comm staff managed more than 68,000 fire emergency calls on behalf of its fire dispatch agencies. With the addition of the 22 fire departments from the FVRD and RDNO, E-Comm is now dispatching for 40 fire departments in B.C.

In what’s believed to be a first for a 9-1-1 emergency call centre in Canada, E-Comm has added a registered clinical counsellor and certified assistance dog to its public safety team.

“Working behind the scenes, emergency call takers and dispatchers are the first, first responders and are on the frontlines of incredibly serious situations,” said Oliver Grüter-Andrew, E-Comm President and CEO. “We see this mental health and wellness initiative as an important way to help our staff cope with the day-to-day challenges of the job, especially in the aftermath of emotionally-wrought calls and events.”

“We are honoured to be able to work directly with this team of dedicated emergency communications professionals,” said Gifford. “Whether they are answering or dispatching emergency calls or maintaining critical technology that are lifelines for first responders, the work of E-Comm staff is essential to public safety.”

Before joining E-Comm, Gifford and Koltan had been focused on supporting police, paramedics, nurses and social workers, who have also experienced various trauma in their line of work while caring for others.

Research shows emergency call takers and dispatchers experience an elevated level of emotional distress doing their work compared to other professions and their exposure to duty-related trauma can lead to occupational stress injuries including Post-Traumatic Stress Disorder (PTSD). As part of E-Comm’s Critical Incident Stress Team program, therapy dogs have visited E-Comm in the past, providing comfort and support following serious events.

E-Comm Training Specialist Jordan Robitaille, who is also a call taker and dispatcher, says Koltan will provide extra support and comfort for staff. “There are some days when you are going to have rough calls and will think about them at home. When you have a big call your adrenaline can be through the roof.” But when Koltan is at your side, “he essentially forces cuddles upon you. How can you say no to that? It’s amazing.”

“Combined with peer support, and other health and well-being initiatives, we are focused on making sure our staff remain healthy both mentally and physically,” added Grüter-Andrew. “I liken it to being on an airplane. You need to put your own oxygen mask on first if you want to help others.”

E-Comm attends a number of community events throughout the year to connect with British Columbia’s neighbourhoods and to share public safety information and 9-1-1 tips.

E-Comm service by the numbers

Number of 9-1-1 calls from landlines and cellphones 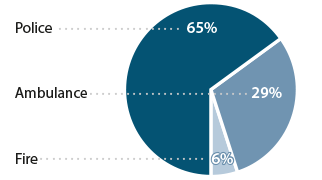