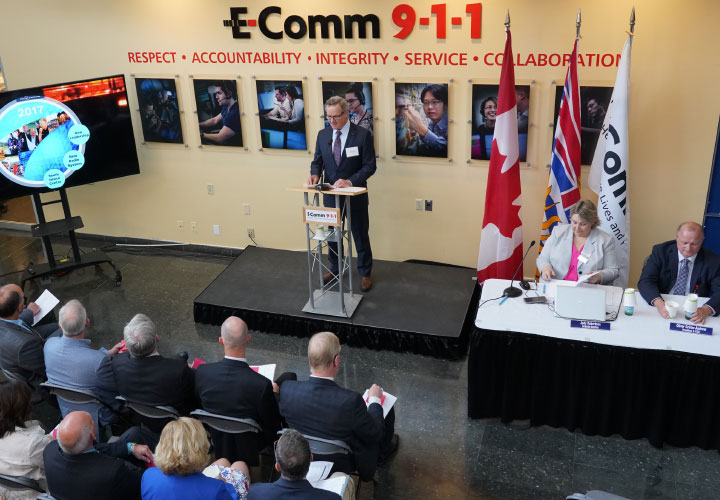 From new executive leadership to breaking ground on a new consolidated 9-1-1/police dispatch centre on Vancouver Island to implementing a new state-of-the-art radio system, 2017 was a year of transitions for E-Comm.

In a presentation to shareholders at the company’s Annual General Meeting on June 21, Board Chair Doug Campbell said 2017 realized substantial accomplishments for E-Comm.

He highlighted a key activity in 2017—the planned replacement of E-Comm’s Wide-Area Radio Network, first implemented in 1999. The project is a culmination of five years of collaboration with police, fire and ambulance agencies in Metro Vancouver and Abbotsford. “I am impressed with the diligence of planning, attention to detail and quality of execution, as well as the collaboration with our partner agencies involved in advancing this critical public safety infrastructure initiative in the Lower Mainland,” said Campbell.

“We’ve realized major goals and milestones, but we’re also focused on our future, by starting work on a new strategic plan that will guide us on the road ahead.”

He noted 2017 was also a year of service expansion for E-Comm including:

“The Board of Directors continues to be gratified by the hard work and dedication of the entire E-Comm team and our public safety partners,” Campbell added.

“We’ve realized major goals and milestones, but we’re also focused on our future, by starting work on a new strategic plan that will guide us on the road ahead,” he shared. “We on the Board, along with our staff, intend to keep the momentum going as we focus on our vision of creating safer communities throughout British Columbia.”

Read more about E-Comm’s 2017 achievements, performance and financial results in the 2017 Annual Report.

E-Comm’s Board includes elected officials, representatives of emergency services and the provincial government, in addition to municipal staff and local community and business leaders.

The director seat representing the Village of Belcarra and the Cities of Coquitlam, New Westminster, Port Coquitlam and Port Moody will be announced at a later date.

It’s a busy summer of construction as crews continue to make progress on the new South Island 9-1-1/Police Dispatch Centre in Saanich. Some 40 tradespeople are on site each day, keeping the pace to allow for a scheduled opening in early 2019.

“The team continues to meet critical construction milestones to ensure the project remains on track, including work on the parkade and storage areas for electrical and power equipment,” said Shawn Carby, Senior Manager of Protective Service for the Capital Regional District, which is overseeing the construction project.

The building is scheduled to be turned over to E-Comm on August 31 for final outfitting.

Meanwhile, E-Comm representatives continue to meet with staff at each current dispatch centre in the region to develop policies and plans to assist with the transition to the consolidated centre. “I’m interested in knowing what people’s thoughts are about best practices in their current environment, so that together, we can co-create the best possible working environment at the new centre,” said Sally Boxall, manager of the South Island Centre. All call takers and dispatchers currently working at South Island police agencies will be offered jobs in the new consolidated centre.

When the centre opens next year, it will handle an estimated 95,000 emergency 9-1-1 calls annually. Once it’s fully operational, E-Comm will be handling 99 per cent of 9-1-1 calls in B.C. between its two centres in Vancouver and Saanich.

I’ve been thinking a lot these past few months about the first responders across British Columbia who have spent the spring and summer tackling extremely serious situations—from floods and fires, to opioids and gang activity.

Whether in southwest B.C., Vancouver Island or Bulkley-Nechako, those on the frontlines deserve our thanks. And right there with them are the staff of our organization and many others, all of whom are also helping to save lives and protect property.

As an organization that specializes in providing call taking, dispatch and mission-critical technology, we understand just how important a role we play in first responder safety and success. With that in mind, I’d like to share some of the collaborative activities underway in support of both.

Construction of the new 9-1-1/police dispatch centre for southern Vancouver Island is progressing extremely well and we expect we will be able to start outfitting the inside of the new post-disaster building in September. We remain on track to be operational starting in January. A new training facility in Metro Vancouver to support our growing operations is also on the horizon. It will also serve as a dedicated evacuation site for 9-1-1 and dispatch services. Consolidation efforts such as these increase our effectiveness and redundancy.

While we completed our move to the next generation radio system in Metro Vancouver earlier this year, the dismantling of the old system continues. Our talented wireless team will manage this important activity until the end of 2018. Implementing the new radio system is certainly a shining example of collaboration and one we’re very proud of.

Collaboration is also at the centre of our strategic planning process, which is now nearing completion. Our Board and executive team are creating a new roadmap for the organization with the input and support of our many stakeholders. It will guide us over the next 5-7 years as we ready ourselves for significant technology and operational changes. Our plan’s foundation will include strategic commitments to our staff, partners, owners and the public to ensure we continue to offer high-quality, reliable services and that we are innovative in advancing them into the future.  I believe the E-Comm model offers great value to the province and that our staff are committed to taking us to the next level. We are preparing to help them be the best they can be and to support them through focusing on their physical and mental health, their training and career opportunities.

On that note, I’m pleased to welcome Kate Dickerson as our new Executive Director of Human Resources. Kate has more than 17 years experience in the public and private sectors leading strategic and employee-focused HR teams. I am confident she has all the skills and energy to help support our incredible teams.

I look forward to sharing our roadmap with all stakeholders in the first half of 2019. Thank you to the Board of Directors for its commitment to this process and to the more than 150 individuals within the public safety community, including our staff, for providing input on where we need to go.

As we near the end of the summer, I wish you and your families the best of all our province has to offer. 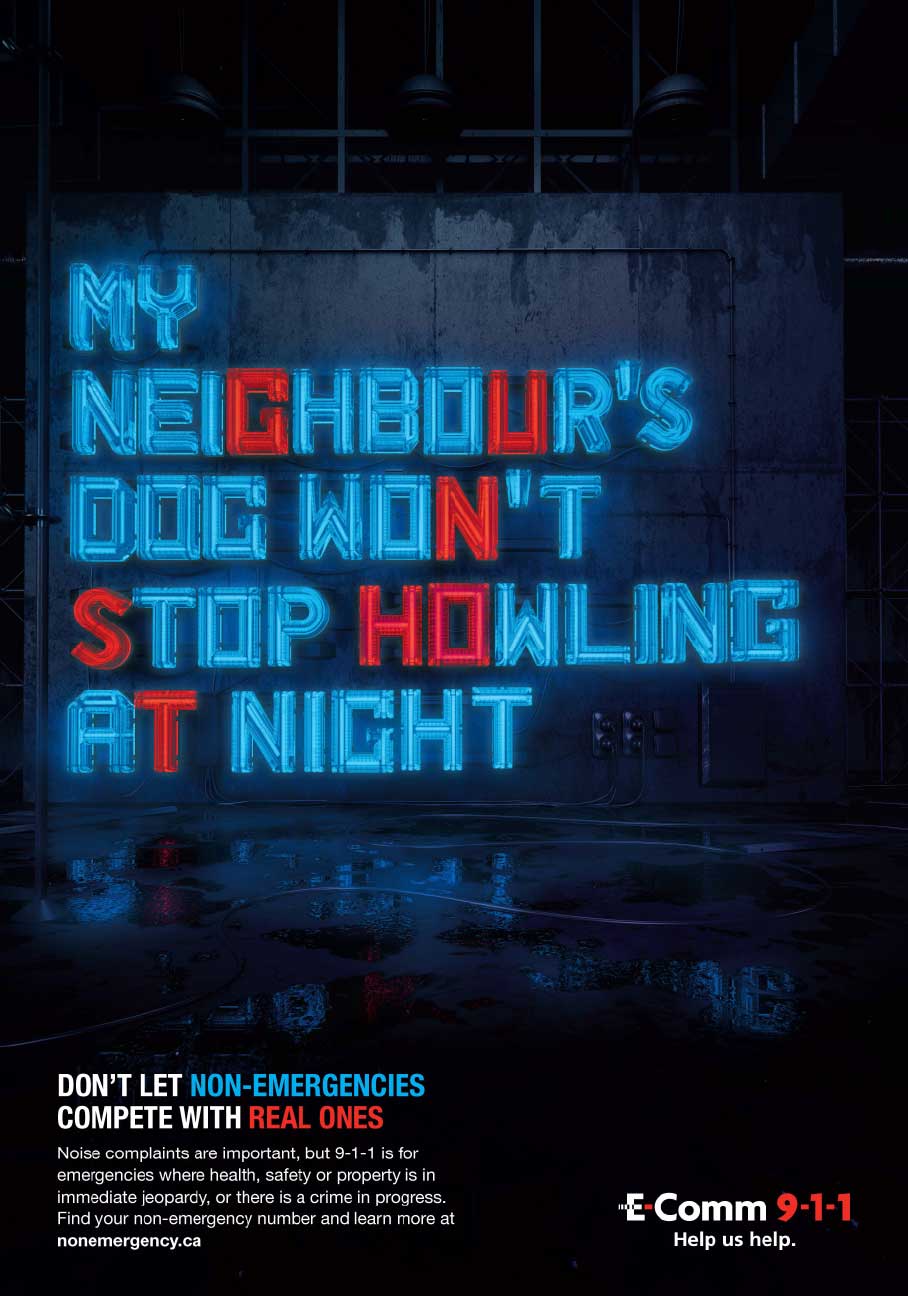 The campaign included two 30-second radio spots depicting the differences between a true emergency call and a non-emergency situation that should not have been reported through 9-1-1.

Working with the advertising agency Cossette, E-Comm created the campaign to drive home our message: don’t let non-emergencies compete with real ones.

“The campaign we produced together is one of the things I’m most proud of in my 10-plus years as an advertising creative.”

“It’s not too often you get to work on something that promotes a meaningful, worthwhile message, while also getting the opportunity to share it in a creatively impactful way,” said Pierre Chan, Associate Creative Director at Cossette. “Working on E-Comm’s non-emergency campaign has definitely been one of those rare opportunities for me. The campaign we produced together is one of the things I’m most proud of in my 10-plus years as an advertising creative.”

E-Comm Executive Director of Corporate Communications Jody Robertson appreciates the honour of being noticed for how E-Comm communicates these critical public safety messages. “Trying to explain the difference between an emergency and non-emergency call in 30-seconds in a compelling way was a challenge,” explained Robertson. “I am very proud of the collaboration and the support of our outreach efforts by our partners in public safety to help communicate this potentially life-saving message.”

This campaign and all of E-Comm’s public education materials are available online.

Firefighters in the City of Langley and Township of Langley are now communicating with robust, top-of-the-line equipment that enhances audio clarity and improves safety for first responders and the community.

On May 23, the Township of Langley Fire Department became a member of the E-Comm Wide-Area Radio Network, which allows firefighters, police officers and paramedics to all communicate on the same channels.

“Being a part of the network will have an enormous impact on how firefighters do their jobs and their ability to help keep our residents safe.”

“We have been looking forward to this for a long time,” said Township Fire Chief Stephen Gamble, adding that the improvement to the clarity of calls coming in was immediately noticeable as soon as the system was implemented. “Being a part of the network will have an enormous impact on how firefighters do their jobs and their ability to help keep our residents safe.”

“Our firefighters work in all kinds of extreme conditions as they protect people, property, and the environment, and the radio is literally a lifeline,” said Township of Langley Mayor and E-Comm Board Director Jack Froese. “Ensuring the well-being of first responders and the public is a top priority and the new Wide-Area Radio Network system and equipment will enhance both operations and safety, especially in mutual-aid situations.”

“The E-Comm radio network provides first responders with significant safety improvements through increased area coverage and audio quality,” said Fire Chief Rory Thompson. “Prior to the changeover, there were areas in the city where first responders had limited radio coverage. Often, crews had to exit a building in order to reach our dispatch. Apartment block parkades and elevator shafts no longer limit our radio coverage. The new radio system has solid coverage across the whole city.”

“Apartment block parkades and elevator shafts no longer limit our radio coverage. The new radio system has solid coverage across the whole city.”

Langley City Mayor Ted Schaffer is excited about the new radio system. “For the first time, police, fire and ambulance responders can talk to each other about the same incident. This will enhance the City’s ability to cohesively respond to any emergency including a large-scale disaster.”