Police officers, firefighters and paramedics in the Lower Mainland are now communicating on a new radio system that enhances clarity of communications and safety for first responders.

The Next Generation Radio Program (NGRP), the planned replacement of the E-Comm Wide Area Radio Network, was completed in March—more than five years after planning for this major public safety infrastructure project began. The NGRP is the largest and most complex technology project E-Comm has undertaken since it implemented the first radio system almost 19 years ago.

“Providing high-performing equipment and an advanced and robust radio system is paramount for the safety of first responders who save lives, fight crime and protect property every day,” said Oliver Grüter-Andrew, E-Comm President and CEO. “The success of this on-time and under-budget project is the result of a huge collaboration between all E-Comm departments and our police, fire and ambulance partners from Lions Bay to Abbotsford.”

Agencies began moving to the new radio network in April 2017. Since then, more than 30 police, fire and ambulance agencies have made the switch to the new best-in-class radio system, which uses Project 25 (P25) technology.  Public safety agencies across North America have widely adopted P25. The final agency transition, Delta Fire & Emergency Services, happened on March 6, 2018.

“Providing high-performing equipment and an advanced and robust radio system is paramount for the safety of first responders who save lives, fight crime and protect property every day.”

“The new system is more advanced, more rugged and more resilient—enhancing the safety of first responders and the citizens they protect,” said Mike Webb, E-Comm Vice-President of Technology Services.  “It has been a tremendous project to be involved with and I would like to thank everyone for their support to make it happen.”

Vancouver Fire and Rescue Services (VFRS) made the move to the new equipment and radio network on February 27.  “We’ve been involved since the beginning in picking the technical requirements for the new system,” said VFRS Deputy Chief Tyler Moore. He added the new equipment and system is all about improving safety for firefighters. “With these new radios, we’re able to eliminate background noise so we have good, clear audio, even in a noisy environment.” First responders have chosen to encrypt radio channels. This means communication among first responders is secure and public privacy is protected when personal information is transmitted over the radio network during an emergency response.

The replacement project started five years ago and required the completion of major activities such as the overall design of the network, procurement of an infrastructure vendor, building a test system and new radio sites, launching the network and managing agency transitions.

The E-Comm Wide-Area Radio Network is the largest multi-jurisdictional, tri-service emergency radio system in the province and is used by police, fire and ambulance personnel within Metro Vancouver and parts of the Fraser Valley. First responders using the network generate nearly 11 million transmissions each month.

E-Comm has begun the process of dismantling its old radio system. E-Comm officially shut down the Enhanced Digital Access Communications System (EDACS) on April 3, once police fire and ambulance agencies moved to the new radio system.

General Electric invented the EDACS in the mid-1980s. When E-Comm established the Wide Area Radio Network in the Lower Mainland in 1999, the network used EDACS equipment and technology.

With the new radio network now in place using Project 25 technology, a standard widely adopted by public safety agencies in North America, E-Comm will spend the rest of 2018 dismantling EDACS. This involves:

The electrical equipment will all be taken to an e-waste facility to be recycled or re-used.

When I first joined E-Comm in September, 11 police and fire agencies in Metro Vancouver had already transitioned to the new P25 radio system. I’m now proud to report that we have more than 30 public safety agencies communicating over the network, with three additional fire departments joining the system.

This five-year, multi-million dollar radio replacement project was completed on schedule and under budget—a tremendous achievement that makes me glad to be part of such a phenomenal effort. The success of the Next Generation Radio Program (NGRP) is a testament to the technical and operational leadership of our region’s police, fire and ambulance partners, who have been involved in this project every step of the way. This best-in-class system could not have been built without their support and expertise. I would like to also acknowledge our Board of Directors for their leadership in overseeing the NGRP, and of course our hardworking technical staff for making sure every transition went as smooth as they did and for building the network from the ground up.

While radio agency transitions were a central focus for us this past quarter, we have also commenced development of a new strategic plan for E-Comm—one that is aligned with our vision of creating safer communities in British Columbia. Consultation with stakeholders across the public safety sector and research into what other public safety agencies around the world are doing has made up the bulk of the work so far. It’s fascinating to see the possibilities future technologies hold for our industry and what this might mean for public safety in our province.

A special Board Task Force has been established to work directly with E-Comm’s executive team to develop our new plan. To date, the strategic planning process has included discussions with close to 200 stakeholders, including police and fire leadership, the provincial government, mental health organizations, Emergency Health Services and the technology sector. Strategic planning workshops have also been held with E-Comm management and staff, to gather insight from an internal perspective regarding our collective vision for the future. I look forward to keeping you updated on our strategic planning process in future issues of e-communiqué.

Technicians were busy at Firehall No. 1 in Port Coquitlam on the morning of February 5 installing new radio equipment in fire apparatus, as the city’s fire department became a new addition to the E-Comm Wide-Area Radio Network.

The move means all fire departments in the Tri-Cities are now operating on the same radio system for the first time (Port Moody Fire Rescue joined in 2001 and Coquitlam Fire/Rescue in 2008), allowing them to communicate more effectively with each other and local police and ambulance agencies.

“Our old system was a single-channel system and the reception was poor,” said Nick Delmonico, Chief of Port Coquitlam Fire & Emergency Services. He says the new system gives Port Coquitlam firefighters interoperability between all emergency service agencies, and in particular, with those in the neighbouring communities of Coquitlam and Port Moody.

“There are 61,000 residents of Port Coquitlam who rely on firefighters to keep them safe and to protect their property,” said Mayor Greg Moore. “Our residents can take comfort in knowing that their firefighters have the right technology at their sides.”

“The new system will make things safer for us,” added the Chief. The move also means Port Coquitlam firefighters are now communicating on the next generation radios and network—a system he says provides “clarity, multiple channels and more efficiency.” He also praised
E-Comm staff for what he calls “tremendous” support in the process. “It’s a huge undertaking to get this done.”

Construction of the South Island 9-1-1/ Police Dispatch Centre continues to advance, with the project remaining on schedule for an early 2019 opening.

Over the past few months, construction crews achieved a number of milestones, including concrete pours for the foundation and the second floor. This spring, crews are focusing on wall formation and the roof. 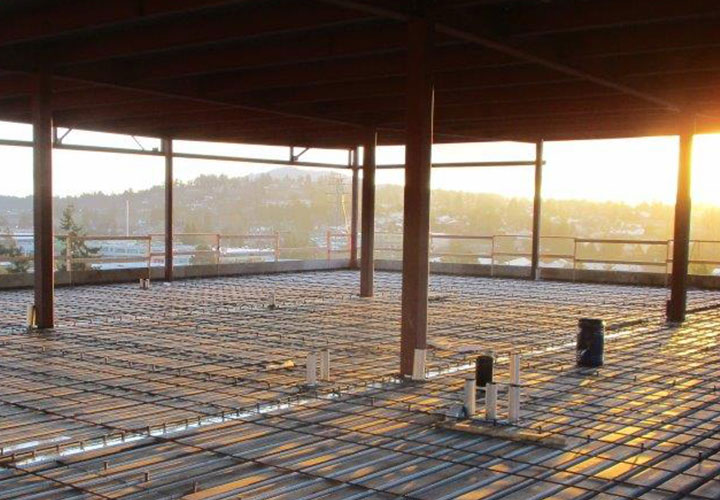 When the centre opens next year, it will handle an estimated 95,000 9-1-1 calls annually. Once it’s fully operational, E-Comm will be handling more than 99 per cent of 9-1-1 calls in B.C. out of its two centres.