E-Comm reached out to British Columbians with a month-long campaign between November and December 2017 to bring attention to the number of non-emergency calls tying up emergency lines.

During the advertising and social media campaign that included radio ads and posters on transit shelters across Metro Vancouver, E-Comm asked people to not let non-emergencies compete with real ones.

Using recent E-Comm estimates showing one-in-five 9-1-1 calls for police isn’t an emergency, E-Comm Manager of Corporate Communications Jasmine Bradley explained the reasons for the campaign in media interviews. “Anytime a 9-1-1 line is taken up for a matter that doesn’t require immediate assistance from first responders, it occupies that lifeline for someone who needs it for a life or death situation.”

E-Comm outlined recent examples of police matters at its centre that should have been reported on non-emergency lines, not 9-1-1:

Police call-taker Jefferey Ching also spoke to the media about his experiences dealing with non-emergency calls received on 9-1-1 lines.  “I hope people will help us by taking the opportunity to learn more about the differences and to keep their local non-emergency numbers on hand if need be.”

Non-emergency numbers within E-Comm’s service area are available at nonemergency.ca.

For the fifth consecutive year, E-Comm published its top 10 list of nuisance calls in December. And, as usual, the year-end list sparked interest in newsrooms and on social media.

“Spending time on calls like these takes me away from being available to help someone who is in a serious emergency situation.”

E-Comm police call-taker Christie Duncan fielded the call that topped the list: a person contacted 9-1-1 to complain that a nail salon wouldn’t change their nail polish colour.  “Spending time on calls like these takes me away from being available to help someone who is in a serious emergency situation,” said Duncan. “And believe it or not, this isn’t the first time I’ve received a call about the colour of nail polish.”

Duncan and E-Comm spokesperson Jody Robertson spoke to media outlets to emphasize that while the calls sound unbelievable, nuisance calls are a very serious issue. “They’re more common than you might think,” said Robertson. “Our call-takers must listen to every caller and ask questions about the caller’s situation. So, an emergency line can be taken up with calls such as the ones on this top 10 list while our call-taker confirms if there’s a real emergency situation.” 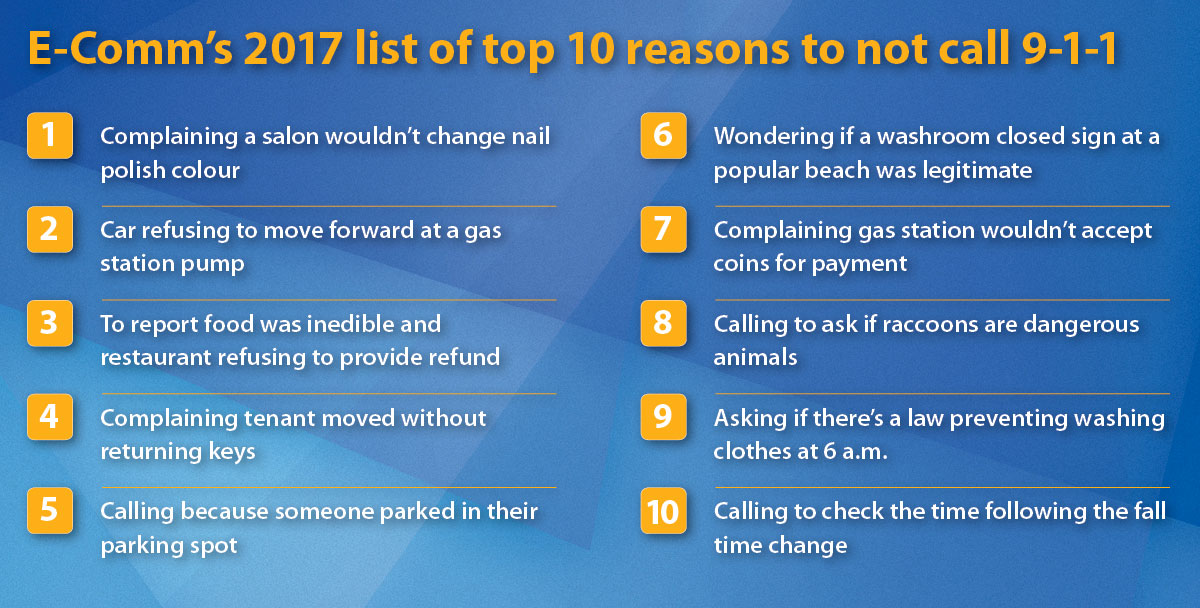 In September, I joined E-Comm as President and CEO and the first five months on the job have flown by. I’m reminded every day of how fortunate I am to work alongside (and for) such amazing and dedicated people.

From frontline 9-1-1 staff to technology experts and support staff working behind the scenes, to police officers, firefighters and paramedics on the ground, to the municipalities and government agencies responsible for overseeing the framework for our public safety services—we all feel a shared sense of responsibility for keeping our communities safe.

I have had the chance to visit with many of our stakeholders, including police and fire leadership and numerous municipal partners since joining the public safety community. Ride-alongs with our police dispatch partners have been especially valuable as has been sitting with our call-takers, report agents and dispatchers and other members of the E-Comm team in departments across the company. Moving forward, I am committed to continuing this outreach to keep the connection and open dialogue going. Open conversation fits perfectly with E-Comm’s values: Respect, Accountability, Integrity, Service and Collaboration. Values are crucial for an organization and all five of these align with my beliefs.

I would like to take this opportunity to announce that Erin Ramsay has been appointed our new Vice-President of Operations. Erin has been at E-Comm for more than 12 years in both operational and executive positions and has extensive knowledge of the dispatch role through her past career with the RCMP. The level of energy she brings to this role, combined with her commitment to staff and our partner agencies, leaves no doubt in my mind that under her leadership we will be able to take our communication centre into the future and address the significant change that is ahead through initiatives such as Next Generation 9-1-1.

Throughout 2018, we’ll be revitalizing our strategic plan to focus on the wellbeing of our employees and needs of our partners, along with preparing for future technology changes. We will also be wrapping up final agency transitions to the next generation radio network, with the team on track for completing this major technology initiative on time and under budget. New partnerships will also play a significant role in our work for 2018, with the Township of Langley and the City of Langley’s fire services scheduled to transition to our radio system in April and Port Coquitlam Fire & Emergency Services recently joining us on February 5. Our public safety role on southern Vancouver Island will also expand, as we continue our work on the opening of a new consolidated 9-1-1 and dispatch centre in 2019.

All things considered, 2018 is shaping up to be a busy year and I look forward to providing future updates. I feel privileged to have the opportunity to join the public safety community and to support E-Comm’s contribution to safer communities.

The APD moved its dispatch services to E-Comm on September 19, 2017—the first municipal police department outside Metro Vancouver to join E-Comm, and is its 18th police dispatch partner.

By moving to E-Comm, APD now has access to a much larger workforce to help answer 9-1-1 calls and support officers on the ground. As Chief Constable Bob Rich explained following the cutover, this is particularly valuable during major events that cause sudden spikes in call volume.

E-Comm has been a proud partner of the APD since 2011 when it first joined the E-Comm radio system. E-Comm has also been providing 9-1-1 call-answer services for the Upper Fraser Valley since 2016.

On November 21, 2017, Coquitlam Fire/Rescue’s dispatch services moved to E-Comm ensuring the community will continue to receive high quality 9-1-1 services as call volumes rise in the future. Access to leading-edge technology, increased staff coverage, alignment with other regional emergency responders and cost benefits are among the advantages of the shift to E-Comm.

“Our decision was made on our ability to keep pace with the rapid growth in the city of Coquitlam—which translated to increased call volume,” said CFR Chief Wade Pierlot, who recently retired. “We want to make sure that we can continue to provide that excellent service to the citizens of Coquitlam. And the tremendous dispatch workforce that E-Comm has, is going to provide that service.”

E-Comm has been partners with Coquitlam since 2008 when the department first joined the regional radio system, and has been providing emergency back-up services for CFR dispatch since 2013.

Throughout 2017, nearly 30 agencies—including police, fire and ambulance—successfully moved to the Next Generation Radio Program (NGRP) network.

“On behalf of the E-Comm Board, I want to extend my congratulations and thanks to the NGRP team for all of its success in 2017,” said E-Comm Board Chair Doug Campbell. “Having been involved in many significant technology and change projects over the years, I know what a challenge it is to get a project of this magnitude done on time and on budget and the NGRP team is doing both. I am impressed with the diligence of the planning, attention to detail and quality of execution, as well as with the collaboration with our partner agencies.”

“This is an exciting day for the ambulance service. The radios are better than we had before.”

BC Emergency Health Services (BCEHS) began communicating on the new network on November 20. The first ambulance in the Lower Mainland equipped with the new radios left Station 248 in downtown Vancouver with BCEHS District Manager Blake Kendon making the first broadcast over the new system. “This is an exciting day for the ambulance service,” he said. As the overnight crews came off their shift at the station—one of the busiest in the province—the daytime ambulance crews picked up their new radios and headed out. “Everyone seemed to pick up on it,”  added Kendon. “The radios are better than we had before.”

On November 2, three fire departments on the North Shore, along with Lions Bay Fire Rescue, migrated to the NGRP. “This is a huge day for the West Vancouver Fire Department and across the North Shore, not only for the interoperability that we’re going to see throughout the region, but also for the safety of our firefighters,” said Chief Randy Heath of West Vancouver Fire and Rescue Services. He added the clarity of the new radio system will allow “for fewer mistakes on the ground.” North Vancouver City Fire Department Chief Dan Pistilli also had high praise for E-Comm staff members for their help in completing the transition. “We couldn’t have done it without all their expertise. We are grateful for everyone at E-Comm for their support in the process.”

After more than a year of planning, Wayne Kennedy, Deputy Fire Chief for the District of North Vancouver Fire and Rescue Services said the transition was completed seamlessly. “It went without a hitch, so we’re excited. Thanks to all the guys at E-Comm for their help.”

“We couldn’t have done it without all their expertise. We are grateful for everyone at E-Comm for their support in the process.”

Also in November, both Surrey and White Rock RCMP detachments switched to the new radio system. The Transit Police Department also moved to the NGRP network at the end of that month. The Abbotsford Police Department transitioned in December.

The first quarter of 2018 wraps up all NGRP transitions with Coquitlam Fire/Rescue, Richmond Fire-Rescue, Vancouver Fire and Rescue Services and Delta Fire and Emergency Services. 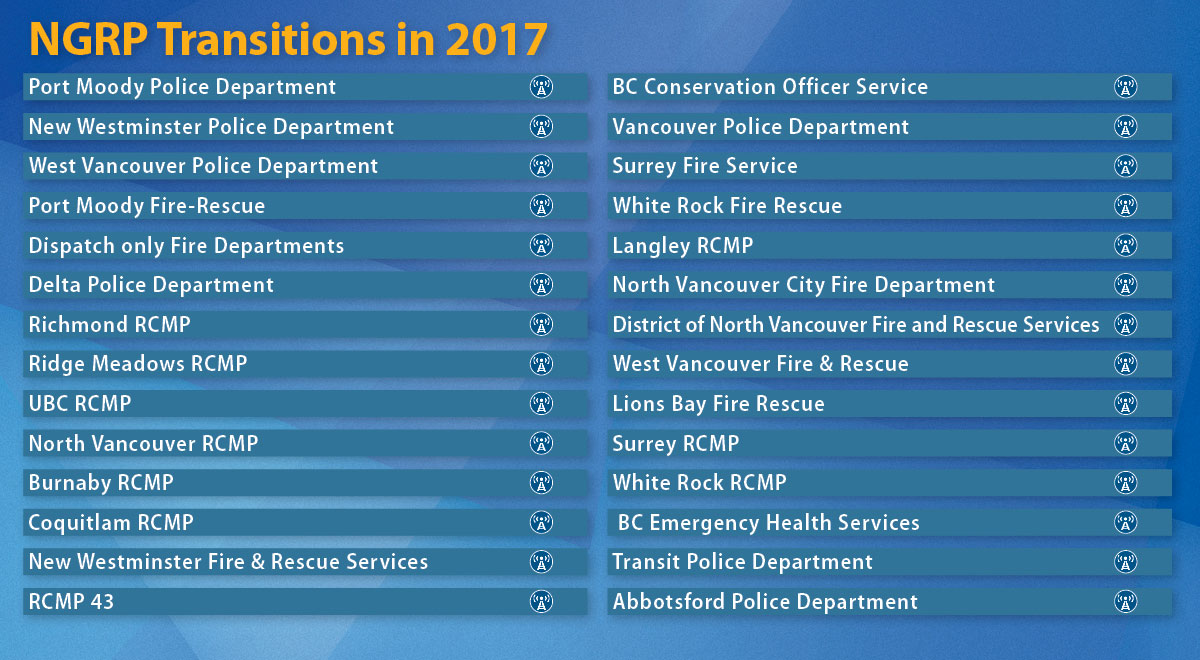