On April 5, the New Westminster Police Department (NWPD) became the first of 32 emergency-service agencies in the Lower Mainland to transition from the current regional radio system to the new “next generation” digital P25 network. Port Moody Police Department followed just minutes later that same morning. This was a historic day for the Next Generation Radio Program (NGRP) and public safety, in the planned replacement of a radio system that supports first responders across Metro Vancouver and Abbotsford and the more than 2.4 million residents they serve.

“Overall, it is an enhanced radio system that gives us more reliability and dependability for our officers and the public.”

Following NWPD’s cutover, Chief Constable Dave Jones spoke about the various benefits of the network. “It’s all about the extra features that come with the new system including enhanced communication, better audio penetration going into buildings and network encryption. Overall, it is an enhanced radio system that gives us more reliability and dependability for our officers and the public.”

“The new network has been proven to provide enhanced coverage and audio clarity in challenging, noisy and hazardous environments, improving firefighter safety.”

E-Comm Vice-President of Technology Services Mike Webb, who led the team involved in establishing Metro Vancouver’s first interoperable radio system, was incredibly proud listening to the first broadcast come over the airwaves. “The launch of our original wide-area radio system back in 1999 was the catalyst for consolidation of emergency communications in our region, and now here we are introducing the next generation system and increasing the value we are capable of providing to our first responder partners.”

Another important NGRP milestone was realized April 25, as Port Moody Fire-Rescue (PMFR) became the first fire department in British Columbia to operate on a P25 digital network. Because of the significant advancements in the performance of digital audio over the past few years, the system is capable of providing better audio clarity and coverage for fire services, which up until this point have been using analogue channels as historically, they performed better in firefighting conditions.

To date, 11 agencies have migrated to the new system and although transitions will not take place over the summer, they will pick up again in September with the goal of having all agencies moved over by the end of the year.

“Transitioning to new technology always has unique challenges and with a project of this magnitude we know there will be unexpected hurdles,” added Webb. “We know this is a significant change for users and I’d like to thank our partners for their support. I’d also like to thank and acknowledge the NGRP team for working hard to address issues in a timely manner.”

To further strengthen the network’s backup coverage in the unlikely event of a radio site outage, the NGRP team has also been developing a new portable radio trailer that will have a built-in tower that can act as a temporary radio site if necessary. This will increase overall redundancy and further enhance the level of service E-Comm is able to provide to its radio partners.

“Portable trailers have been used by cellular companies for years in order to deal with service outages,” explained NGRP Senior Project Manager Cleve Pryde. “They allow you to move the temporary solution to wherever the problem happens to be. Cellular companies always name their trailers after an animal. So our Wireless team decided to name ours EMU; Emergency Mobile Unit.”

The portable trailer weighs 8,100 kilograms and is more than 30 metres high. 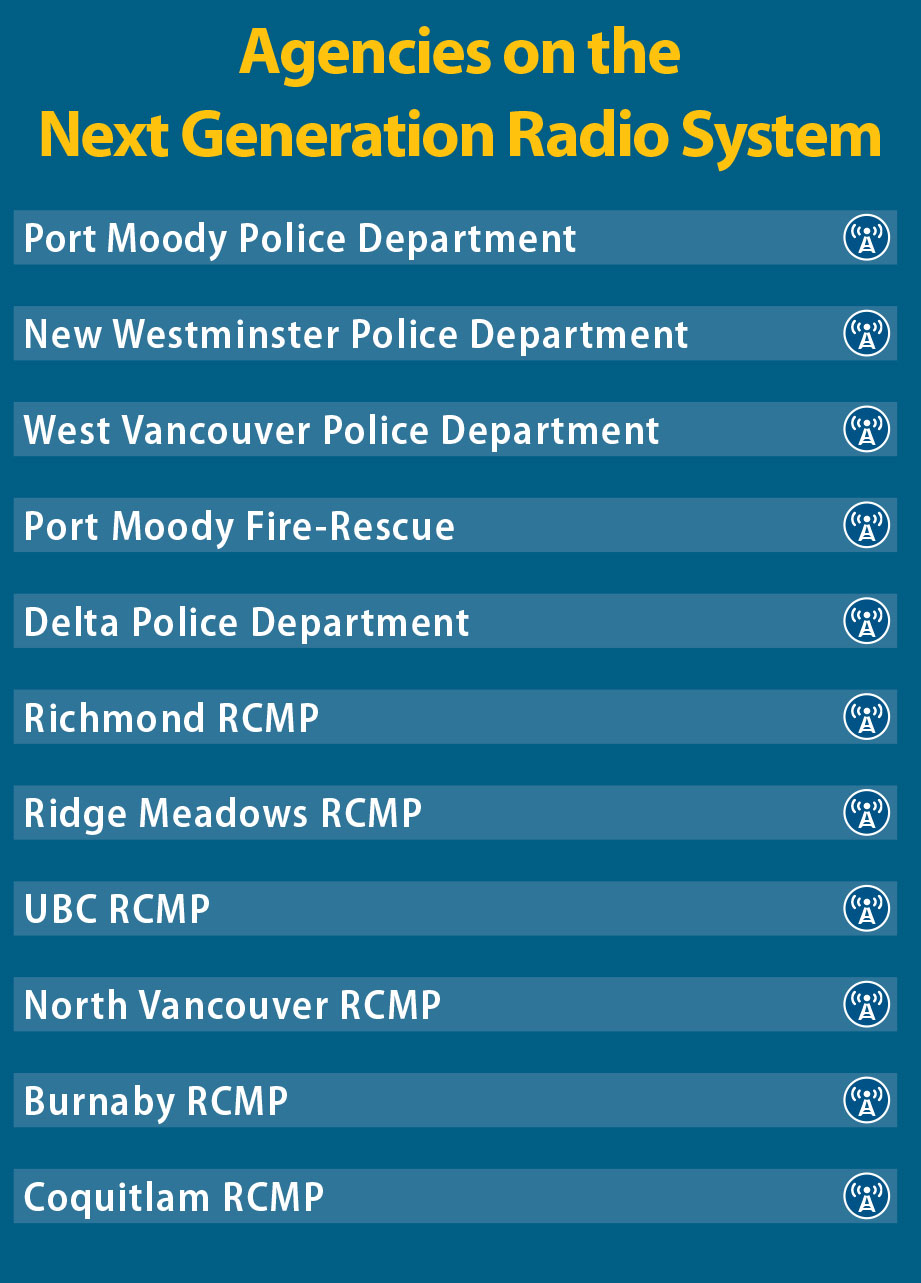 The transition of 9-1-1 call-answer services for the Peace River Regional District (PRRD) to E-Comm was successfully completed at 0721hrs on May 17, making the emergency communications centre the first point of contact for 9-1-1 callers in 26 regional districts and communities across British Columbia—89% of the province’s overall call volume.

Twenty-eight minutes after the cutover, the first 9-1-1 call came in from Fort St. John from a caller in need of the RCMP. The call was immediately transferred to the RCMP’s North District dispatch centre in Prince George, responsible for dispatching police across the regional district. In a news release following the transition, PRRD Board Chair Brad Sperling noted the benefits for residents of the regional district as a result of the partnership.

“We believe our new partnership with E-Comm will allow us to provide residents with the same high-quality 9-1-1 service they are accustomed to receiving, but in a more cost-effective manner with added operational benefits. This includes having access to a larger workforce to deal with sudden influxes of high 9-1-1 call-volume,” explained Sperling.

Approximately 20,000 emergency calls are placed annually from Peace River country, the largest regional district in the province. 9-1-1 calls from Fort St. John, Dawson Creek, Chetwynd, Hudson’s Hope, Pouce Coupe, Taylor and Tumbler Ridge, along with many of the region’s First Nations communities, are now received by E-Comm’s team of highly skilled 9-1-1 call-takers before being transferred to the requested emergency service agency—police, fire or ambulance. 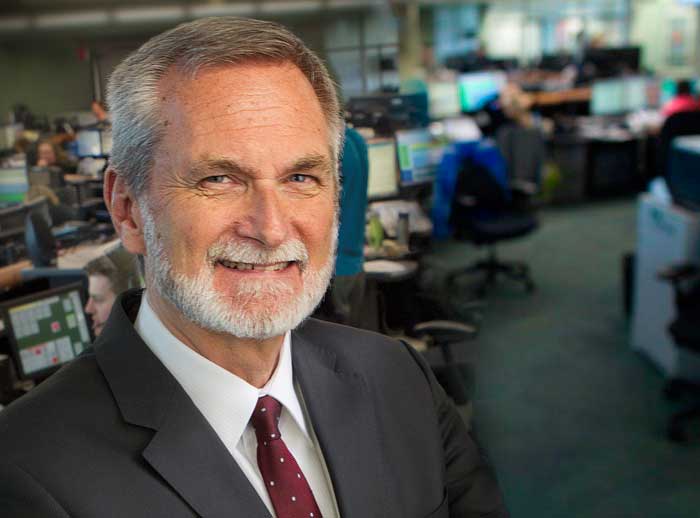 I’m pleased to report that E-Comm staff and our public safety partners achieved a significant milestone in April as the first police and fire departments began operating on the new next generation radio network, which will grow to be the largest multi-agency, multi-jurisdictional digital radio system in B.C.

From the beginning our goal for this complex technological undertaking has been to ensure the highest-quality service to our partners through best-in-class technology, while remaining fiscally accountable to our radio shareholders. Through detailed planning and careful oversight, we are well on our way to realizing that goal. We understand an evolution such as this is a significant change for users—police officers, firefighters and paramedics—and our team remains committed to supporting agencies throughout the remaining transitions.

At the national level, two recent announcements are expected to directly shape the future of public safety communication in Canada. Following a yearlong consultation on improving public emergency communications services, the Canadian Radio-television and Telecommunications Commission’s landmark direction for telecom networks to update 9-1-1 infrastructure by 2020 will enable next generation capabilities such as texting to 9-1-1. Now that a timeline has been confirmed, public safety organizations, including E-Comm, can begin planning for the technological and operational changes that need to be considered as part of this modernization. A new federal task force was also announced to look at ways of implementing a potential new Public Safety Broadband Network. This new network will create a secure means for emergency responders to share information and communicate with each other using a high-speed wireless data communications network dedicated exclusively to public safety agencies. I invite you to read more about these important public safety initiatives in this issue of our newsletter.

As this will be my final e-communiqué update before I retire, I would like to reiterate what a privilege it has been to be a part of E-Comm and work in support of B.C.’s police, fire and ambulance leadership and frontline personnel. But before I do, I would like to take the opportunity to recognize our Vice-President of Operations Doug Watson, who also recently announced his retirement. Doug has been with E-Comm for close to ten years and has been a tireless advocate for public safety and a champion for the benefits of E-Comm’s consolidated emergency communications model every step of the way. After 40 years of service to the telecommunications industry, he has earned his retirement and we know he will be missed by our Board, our staff and our partners across the province.

As I look back on my own time at E-Comm, what has become apparent is that at the heart of all public safety achievements are partnerships. It’s what sets British Columbia apart and what has allowed E-Comm and its partners to become the public safety leaders we are today.

A final thank you to our Board, partners and staff for your support, guidance and continued dedication to the vision of this organization. I wish you all continued success now and into the future.

At the Annual General Meeting June 22, E-Comm shareholders appointed the following individuals to the Board.

Technology networks that support Canada’s 9-1-1 systems must be updated by the country’s telephone and wireless carriers by the end of 2020 in order to be ready for next generation 9-1-1 (NG9-1-1) services to be delivered to Primary Public Safety Answer Points  and the public. This paves the way for text to 9-1-1 for the public in the future.

The timeline was announced by the Canadian Radio-television and Telecommunications Commission (CRTC) on June 1, following a yearlong proceeding on the development and implementation of a regulatory framework for NG9-1-1, a North American-wide initiative to update 9-1-1 infrastructure in order to improve public emergency communications services in an increasingly wireless and internet-enabled world.

When the new Internet-based networks are ready, E-Comm will move to implement the many aspects of Next Generation 9-1-1 within its service areas as quickly as possible. “We were the first centre in Canada to implement Text with 9-1-1 for the deaf and speech impaired and we see moving to a new infrastructure as a natural evolution. We have outstanding technical and operational staff to make this happen,” said Mike Webb, E-Comm’s Vice-President of Technology Services.

As part of the announcement, the CRTC has directed existing 9-1-1 networks to be decommissioned by the middle of 2023, a move that is expected to encourage municipal, provincial and territorial governments to make the transition to next generation 9-1-1 services like texting.

“The CRTC’s decision will mean that we can begin planning for the modernization of our technology systems in anticipation of next-generation 9-1-1. With this deadline in place for carriers, we now have a much better idea of how we will best be able to connect to the new technology being used for these networks,” added Webb.

In other important public safety communication news, first responders and other organizations have an opportunity to participate in a federal task group that will start to engage with stakeholders, including E-Comm, across the country later this year on the establishment of a potential new Canadian Public Safety Broadband Network (PSBN).

PSBNs are secure, high-speed wireless data communications networks used by emergency responders to share information and receive texts and audio and video through secure mobile devices such as smartphones during major crises and day-to-day operations. The PSBN can only be used by public safety agencies, so responders’ critical information will not get jammed up in overloaded public networks, which can happen during mass public gatherings like sports events or major fires where spectators have their smartphones out to grab footage to upload to social media or to send to friends.

In the long-term, the establishment and evolution of the PSBN will also allow E-Comm’s Next Generation Radio network to integrate with the broadband data network, providing E-Comm’s radio partners with additional voice radio network access. A PSBN will also enable Next Generation 9-1-1 technologies that will be introduced in the coming years, resulting in greater capacity and more secure information sharing among police, fire, ambulance and other emergency service personnel. 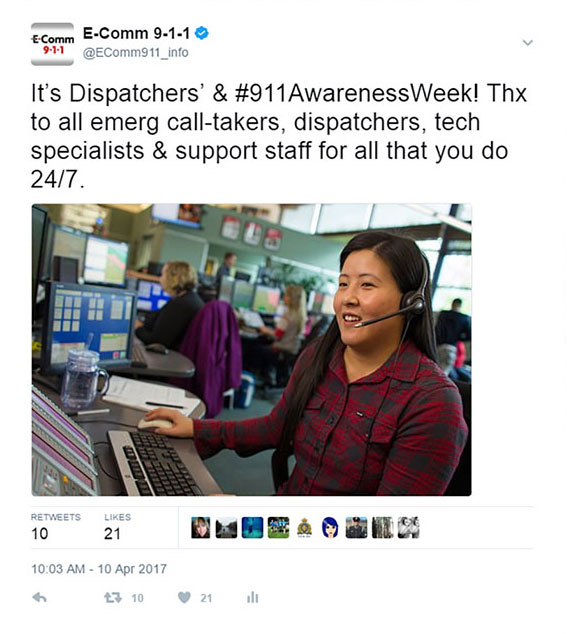 Whether a 9-1-1 call-taker, dispatcher, report agent or technology specialist, each member of these important public safety professions contributes to saving lives and protecting property 24/7.

About 1.5 million emergency calls are made in B.C. each year at all times of day and night.

“You form an essential link between the public and first responders that is key in keeping the residents of British Columbia safe. We are exceptionally cognizant of the vital role that E-Comm plays and how we couldn’t do what we do without all of you.”

“The continued high quality of service E-Comm delivers to the community and emergency service partners is exceptional.”