Info on earthquakes, broken gym lockers cited as examples of when not to call 9-1-1

E-Comm wrapped up its public education efforts in 2016 with two campaigns focused on the serious impact non-emergency calls to 9-1-1 have on public safety resources. The overarching message of both campaigns was that emergency resources are finite and each time a call is made to 9-1-1 for a matter that does not require immediate assistance from first responders, lives are put at risk.

In the first campaign, E-Comm supported the Great British Columbia ShakeOut drill by highlighting its experiences during the 2015 earthquake. Call-taker Megan Wong worked during the 4.7-magnitude quake that was felt across much of southwestern B.C. She spoke to the media about the types of calls she answered and stressed the importance of re-directing questions and requests for information to official sources in order to keep 9-1-1 lifelines free for real emergencies.

“The calls that I took that night were definitely not emergencies,” said Wong. “People were calling with questions or statements like: Was that an earthquake? My whole house just shook. Will there be more tremors?” Wong went on to explain that “as a 9-1-1 call-taker my job is to help people with emergencies and that’s why it’s so important to me that we get the message out that when people call 9-1-1 for information or any other reason that is not an emergency, they’re tying up valuable resources.”

“The calls that I took that night were definitely not emergencies.”

Following the earthquake, E-Comm was flooded with hundreds of 9-1-1 calls in just 15 minutes—a 1500% increase over normal call volume for a typical Tuesday night. Because the vast majority of those calls were information requests that unnecessarily tied-up call-takers’ time, E-Comm stressed the importance of having a personal preparedness plan and directed people to its website for tips on dialing 9-1-1 after an earthquake and the right channels to turn to for information and updates.

A broken gym locker and a query about job opportunities topped E-Comm’s annual list of reasons to not call 9-1-1—part of the emergency communications centre’s continued public outreach. Issued in December, the purpose of this campaign is to raise awareness about nuisance calls to the emergency line and the impact they have on emergency resources. Dispatcher Jim Beland and call-taker Chris Faris answered the top two nuisance calls of 2016.

“Our job is to treat each call as an emergency until we can determine otherwise. We want our time reserved for people who need help because they have a legitimate emergency.”

“I’d like to be able to say that calls such as the ones on our top-ten list are rare, but unfortunately this isn’t the case,” explained Beland, who took the gym locker call. “Our job is to treat each call as an emergency until we can determine otherwise, and this takes time. We want our time reserved for people who need help because they have a legitimate emergency.”

Faris added that “unfortunately, we do get a lot of people who call 9-1-1 thinking it can be used as an information hotline. We get a lot of calls that start off with ‘this is not an emergency but…’ and that’s a concern when we know there are other people out there who need our help.”

The kinds of calls highlighted in both campaigns are also not appropriate for the non-emergency line, as they are not police matters. That message was also emphasized in an effort to not tie-up those lines as well. 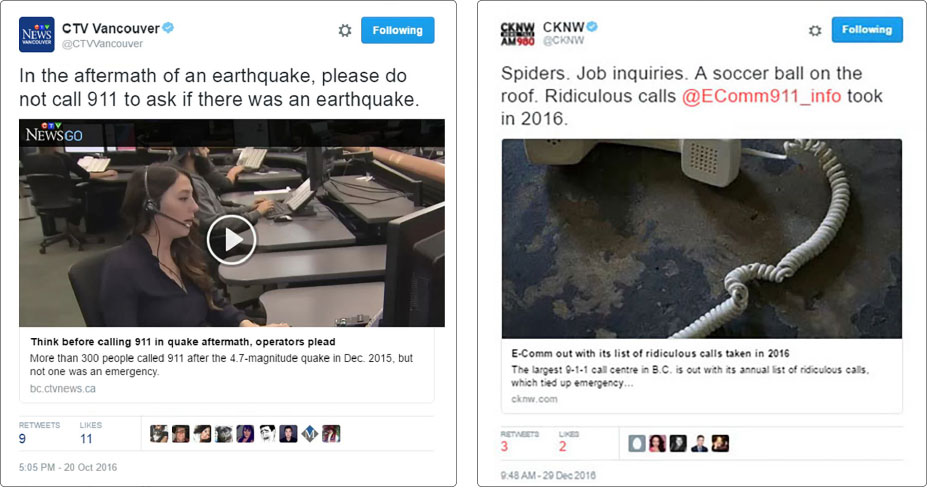 With emergency service agencies scheduled to begin moving to the new regional radio system in April, E-Comm’s Next Generation Radio Program (NGRP) team has been focused on ensuring agency-selected radios are thoroughly tested prior to the start of transitions. This includes programming the new equipment to accommodate the unique needs of individual agencies and conducting extensive field tests. Having the opportunity to assess the capabilities of equipment in realistic working environments allows agencies to make informed choices in terms of the specific radio features that will best suit their organizations.

“I was surprised by how clear the audio was on the new radios compared to what we’ve been using.”

Both handheld portables and in-vehicle mobiles were evaluated during testing, with all radios performing in a manner that met or surpassed agency requirements. Battery life for extended events is a key consideration for agencies when selecting their radios, and so as part of the field tests the team analyzed the length of time a fully charged radio would last leading up to a final transmission. The average battery life for most radios was more than ten hours. Audio quality was also evaluated, particularly with regard to the ability of a radio to effectively reduce background noise and improve audio clarity.

Results from the performance tests have been extremely favourable. Recently, West Vancouver Police Sgt. Tim Kravjanski shared his experiences after taking part in a series of tests in areas known for poor transmission quality, including a location four storeys below ground underneath a concrete slab.

“I was surprised by how clear the audio was on the new radios compared to what we’ve been using,” explained Sgt. Kravjanski. “We tested the reception strength in one of the worst locations in West Vancouver and I’m happy to report the new radios work 100% better. I honestly did not expect to see that much of an improvement—I was very impressed.”

“The scope of the field tests allowed E-Comm wireless technicians to see firsthand how the radios will perform. Some of the key features that were tested included radio performance while roaming across different jurisdictions, audio quality in low-signal areas like urban high-rise buildings and battery life of individual radios.”

Closing in on seven years as President and CEO of E-Comm, I will be retiring at the end of August.

My admiration for the work of British Columbia’s police, fire and ambulance leadership and frontline personnel is second to none and it has been a privilege to be a part of public safety since joining E-Comm in November 2010. Naturally, I have a special fondness and appreciation for the people who work behind the scenes—9-1-1 call-takers, dispatchers, technology specialists and the many other support personnel who keep E-Comm and all public safety organizations running. I am extremely proud of the contribution of our staff in helping to save lives and protect property in communities across the province; they are among the most dedicated people I have ever worked with. Our goal always has been, and always will be, to provide high-quality service and technology that serves the best interest of public safety and contributes to safer communities.

“Our goal always has been, and always will be, to provide high-quality service and technology that serves the best interest of public safety and contributes to safer communities.”

Our Board of Directors has created a vision for E-Comm and provided excellent strategic direction for us through our strategic plan, Vision2020. I know our Board remains dedicated to advancing key strategic initiatives while creating value for our shareholders and partners. A national search for my successor is underway, led by Board Chair Doug Campbell. I will be here until August 31 to ensure a smooth transition. In the meantime, we continue to press forward with our many initiatives and to answer more than 100,000 emergency calls each month and to maintain our high-performing technology.

I would like to thank the Board, the E-Comm User Committee, my executive team and our staff for their support and commitment to our collective success.

The Delta Police Department (DPD) is the first in Canada to introduce new technology to help track vehicles that fail to stop for police. The department launched its first GPS tracking dart onto a vehicle that failed to stop on January 11, ushering in a new era in public safety.

The StarChase Pursuit Management Technology is a web-based application that allows officers to track suspect vehicles by attaching a GPS dart launched from the front of the police cruiser to the rear bumper or licence plate of the fleeing car. Police can then fall back and monitor the location of the vehicle without engaging in a high-speed pursuit.

“There were more than 70 ‘fail to stop’ incidents in 2016 and we needed to look at available options that would help us address this issue,” said Sharlene Brooks, DPD Public Affairs Coordinator, as she discussed the benefit that the StarChase Technology could provide for the department. “There’s always inherent risk involved when you’re engaged in a pursuit, but innovative tools like StarChase allow us to effectively police while reducing this risk.”

“As dispatchers, we are responsible for tracking the suspect vehicle while officers take into account the information we give them to determine the best way to apprehend the suspect.”

In the event of an activation, dispatchers log on to the StarChase website where they can see all eight Delta police cars that are equipped with the technology, including their location and where they are going. Once the dart is deployed, the car will change colour on screen and E-Comm staff will then monitor the suspect vehicle and provide updates to officers.

“The key feature of this technology is that police don’t have to engage in high-speed pursuits,” remarked Allan. “As dispatchers, we are responsible for tracking the suspect vehicle while officers take into account the information we give them to determine the best way to apprehend the suspect.”

DPD Chief Constable Neil Dubord explained how this technology would not have been made available to his department without the support of the Delta Police Foundation.

“I do believe it is incumbent on us to employ advanced technology options that may assist us in our efforts to be effective at doing our job while mitigating risk to the public. When we first began looking into options to address the increasing number of ‘fail to stop’ incidents in our community, StarChase caught our eye and thankfully the Delta Police Foundation agreed to fund the project—we are very appreciative of their support.”

The Canadian Association of Public-Safety Communications Officials (APCO) held its annual exhibition and conference in Banff in November, where the 9-1-1 call-takers and dispatchers of the 2014 Moncton shootings were honoured with the Excellence in Teamwork Award.

In a moving tribute, they were recognized for their role in responding to the tragic shootings that saw three RCMP officers killed in the line of duty and two others seriously injured. E‑Comm’s fire dispatch team was nominated in this category for its outstanding efforts during a chemical fire that broke out in a large shipping container at the Port of Vancouver the year prior. The 31-hour event saw dispatchers handle a 300% increase in 9-1-1 call volume, while simultaneously fielding calls from agencies requiring updates.

During the APCO Canada conference, E-Comm staff made presentations on lessons learned from a dangerous goods tabletop exercise and the importance of accurate staffing forecasts for emergency communications centres. The overarching theme of discussions during the conference was resiliency, and the importance of support for those working in public safety, particularly concerning mental wellness. Another topic of interest to delegates was Next Generation 9-1-1 (NG9-1-1)—a North America-wide initiative to update and modernize 9-1-1 infrastructure. Discussions on the future opportunities NG9-1-1 holds for emergency services also came up at the Canadian Interoperability Technology Interest Group (CITIG) tradeshow and workshop held later in November in Vancouver. First responders, government agencies, military representatives and academic institutions from across North America participated in panel discussions about the future of public safety in Canada.

“The value of industry conferences lies in the opportunity they create to engage in high-level discussions about current and future challenges related to emergency communications,” reflected E-Comm’s Vice-President of Technology Services Mike Webb, who attended the CITIG event. “As we look ahead to the implementation of initiatives like NG9-1-1, it is imperative we address the anticipated impact on public safety agencies and look for a unified, national approach to addressing technological and operational issues.”