Starting in spring 2017, police officers, firefighters and paramedics across the Lower Mainland will start to use new radios that will be more effective and durable in challenging conditions and provide greater safety features for first responders. The transition to new radios is part of the planned replacement of the current regional radio system, an initiative known as the Next Generation Radio Program (NGRP).

“What it all comes down to is what’s best for the public safety community; helping first responders to be able to provide the highest level of service by ensuring they have the right radios at their disposal.”

Agreements were recently signed with three radio suppliers—JVC KENWOOD Canada Inc., Motorola Solutions Canada and RELM Wireless Corporation following a Request for Proposal from pre-qualified vendors earlier in the year. The agreements mark a significant milestone for the NGRP as it will be the first time emergency-service agencies will get to choose from a range of radio equipment that suits their specific operational requirements and budgets. Among the key features of the new radios are the following: Greater reliability, water immersion resistance, radio monitoring (enabling dispatchers to remotely activate radio microphones for improved responder safety), noise-cancelling technology (to reduce background sounds and allow responders to be heard more clearly in noisy environments), increased security, GPS tracking, an expanded range of accessories and the ability to add new features through software upgrades in the future.

Leading up to the signed agreements, a comprehensive technical evaluation of proposals and series of conformance tests were undertaken to ensure radios met the technical requirements of operating on the new network.

“A priority for the NGRP team was to engage vendors that could offer agencies a variety of radio options to ensure responders are outfitted with the best tools to do their job,” explained Vancouver Fire and Rescue Services’ Deputy Chief Tyler Moore, who had an opportunity to test some of the new radios at a recent tradeshow event organized by E-Comm. “The importance of police, fire and ambulance departments being able to select radio equipment that suits their specific needs cannot be overemphasized.”

“A priority for the NGRP team was to engage vendors that could offer agencies a variety of radio options to ensure responders are outfitted with the best tools to do their job.”

The preferred type of radio and specific technology features required can differ between police, fire and ambulance. For example, larger radios are more desirable for firefighters who wear bulky protective gear such as gloves and jackets. Radios also need to be extra rugged to operate in firefighting conditions (i.e. waterproof); whereas police may prefer smaller, lighter radios that have longer battery life during extended events.

E-Comm President and CEO David Guscott echoed Deputy Chief Moore’s comments about the benefit of providing agencies with options for radios. “What it all comes down to is what’s best for the public safety community; helping first responders to be able to provide the highest level of service by ensuring they have the right radios at their disposal. I’m pleased to have such a wide variety of options available for our partners.”

To assist in the selection of radio equipment, E-Comm held several tradeshow events over the past few months that allowed agencies to examine the new equipment and learn about the different radio features and functionalities. Sample radios and accessories (e.g. radio chargers, speaker microphones and headsets) were made available for chiefs and frontline responders to try out as part of the equipment selection process. The next step is to arrange for ‘live’ testing sessions using demo radios on the new network. This will allow responders to get a feel for how the radios will operate in the field.

The new network—scheduled to be fully rolled out across Metro Vancouver and Abbotsford by early 2018—will be based on digital radio technology known as Project 25 (P25) in the 700 MHz band. This is an open standard that public-safety agencies across North America have widely adopted and that has been endorsed by the Lower Mainland emergency services community.

As dispatch provider for 35 police and fire departments, E-Comm participates in a number of emergency response exercises as a means of providing its partners and staff with the opportunity to test operational processes and practise emergency plans.

And over the summer, E-Comm and its dispatch partner of eleven years, New Westminster Fire & Rescue Services (NWFRS), took these exercises to the next level by creating a series of unique simulations that allowed participants to operate under more realistic circumstances.

Four exercises were created based on a number of rapidly changing, large-scale fire scenarios and for the first time, these exercises were carried out using ‘live’ dispatch channels and phone lines. This was a unique departure from past exercises that focussed on supporting boots on the ground by using replica channels and systems.

“The advantage of having E-Comm dispatch be an active part of the exercises was that it allowed participants to respond as if it were an actual event happening in real time,” explained NWFRS Chief Tim Armstrong. “Everyone played out each scenario as if it was actually unfolding; we even had dispatchers make call-outs to neighbouring fire departments to request mutual-aid in order to help determine how quickly we could secure back-up.” Chief Armstrong added it was an opportunity to fine-tune systems and processes from the ground up and gave everyone a realistic impression of what it would be like to respond to a major fire.

“The advantage of having E-Comm dispatch be an active part of the exercises was that it allowed participants to respond as if it were an actual event happening in real time.”

At NWFRS, the Incident Commander used a screen to simulate a fire and make the exercise more authentic and participants were able to communicate using ‘live’ channels just as they would in an actual event. From answering emergency calls and setting up radio talk groups, to responding to a trapped firefighter, the simulations detailed all facets of an emergency.

“We were able to showcase E-Comm’s ability to support our partners during a number of complicated fire scenarios,” said E-Comm Fire Dispatch Manager Jennifer Gjaltema. “Not only are we better prepared for serious emergencies moving forward, but we learned some new things regarding how we can advance our current communications processes.”

Gjaltema added that E-Comm is committed to ensuring the right tools and processes are in place to best support its fire dispatch partners and welcomes the opportunity to work with other departments on similar exercises in the future.

This year marked the 26th annual Celebration of Light fireworks festival, one of the biggest events of the summer for the Lower Mainland. The Vancouver Police Department estimated that more than 1.3 million people attended the festival, which took place over three nights.

While call volumes to 9-1-1 on the first two evenings were similar to past years, record crowds gathered around English Bay for the finale causing heavier call volume. To add to an already busy night, a wildfire broke out in Vernon—a city that E-Comm answers and transfers 9-1-1 calls for. This resulted in a 20% spike in 9-1-1 call volume. 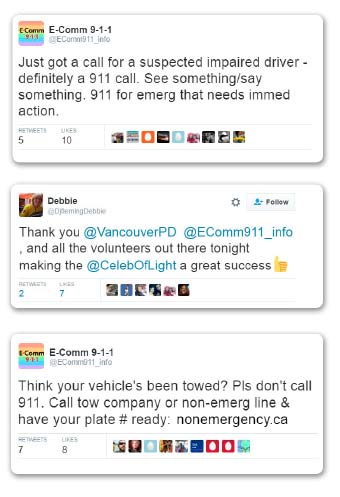 “I have 15 years’ experience working during Celebration of Light,” reflected Beth Latorre, an E-Comm police dispatcher. “In all my years working this event, I’ve never seen as many people as we saw on finale night. But we were all prepared and staff handled the increase in calls really well.”

The summer continued to be busy for E-Comm’s communication centre as staff also supported partners Delta Fire & Emergency Services (DFES) and newly transitioned Delta Police Department during the Burns Bog fire. In the first 24 hours of the fire, the blaze spread to 80 hectares in size and required more than 100 firefighters from DFES and BC Wildfire Services as well as air tankers and four helicopters. E-Comm’s Operations team not only supported fire services but also supported the police as a number of major road closures and an evacuation took place as a result of the fire.

9-1-1 texting available for Deaf in the northern, central and southern interiors

Regional districts in the northern, central and southern interiors of B.C. recently announced the availability of a specialized text service for those who are Deaf/Deaf-Blind, Hard-of-Hearing or Speech Impaired (DHHSI).

The service, called Text with 9-1-1 (T9-1-1), allows members of the DHHSI community to communicate with a 9-1-1 call-taker via text message in the event of an emergency. It is delivered by E-Comm in partnership with local emergency-service agencies and is now available throughout the regional districts of Fraser-Fort George, Cariboo, Kitimat-Stikine, Bulkley-Nechako, Central Okanagan, North Okanagan, Central Kootenay, Columbia-Shuswap, Okanagan-Similkameen, Thompson-Nicola, East Kootenay, Kootenay-Boundary and Squamish-Lillooet.

“T9-1-1 is a vital connection to police, fire and ambulance and enables quick communication between a Deaf caller and emergency services,” remarked Gordon Rattray, treasurer of the Okanagan Valley Association of the Deaf (OVAD). “In the past Deaf people were limited by communication barriers and would have to use phone relay or TTY (telephone typewriter) units which would take five or ten minutes longer. The OVAD is very excited to have T9-1-1 in the interior regional districts and we look forward to helping promote the availability of this service with the DHHSI community. We’re proud of this enhancement to emergency services that E-Comm provides.”

Art Kaehn, board chair for the Regional District of Fraser-Fort George, echoed Rattray’s sentiments. “We are pleased our DHHSI communities now have an improved way of communicating with local police, fire and ambulance services. I encourage people not to delay in registering for this service and to learn how to use it.”

The specialized T9-1-1 technology was developed by Canada’s telecommunications services providers and requires users to register for the service. To initiate the text session with a 9-1-1 call-taker a voice call must first be placed to 9-1-1.

E-Comm was the first 9-1-1 centre in Canada to launch the service in March 2014 and since then, has handled 35 T9-1-1 calls. The service is also available throughout Metro Vancouver and northern Vancouver Island. For people without hearing and speech impairments, voice calling remains the only way to communicate with 9-1-1 services as T9-1-1 is available only to members of the DHHSI community. Text messages sent directly to the digits “9-1-1” will not reach emergency services anywhere in Canada. Text to 9-1-1 for the public-at-large is anticipated in the future as the nationwide 9-1-1 infrastructure evolves.

Members of the DHHSI community should visit TextWith911.ca to register their cellphones with their wireless service provider and to learn more about how the system works.