First broadcast on new radio network clear as a bell

A landmark first broadcast over the new Lower Mainland radio system currently in development went off without a hitch at the end of the summer between a North Shore mountaintop pilot site back to Vancouver. Both audio quality and coverage were rated as extremely positive, two primary objectives of the radio replacement initiative known as the Next Generation Radio Program (NGRP). The tests are considered a significant step forward for the NGRP which is expected to be fully rolled out by the end of 2017.

“We were very pleased with the results of the first transmissions over the new radio system,” said Mike Webb, E-Comm’s vice-president of Technology Services. “Testing went seamlessly thanks to the efforts of our wireless and network teams, who are already working on the next phase of testing key functions and design capabilities to ensure the new system meets the needs and expectations of first responders and the public safety community.”

“We were very pleased with the results of the first transmissions over the new radio system.”

The first broadcast over the new network followed months of technical activities including switching backhaul Internet Protocol networks to new technology in order to provide efficient and robust communication paths to radio sites. The NGRP team is currently involved with pilot testing, with a total of eight sites now in service. The comprehensive testing phase is scheduled to be complete by the end of the year.

“As the NGRP continues to gather momentum, the top priority remains thorough testing through each phase of development to ensure a smooth transition to the new radio system commencing in 2016.”

“As the NGRP continues to gather momentum, the top priority remains thorough testing through each phase of development to ensure a smooth transition to the new radio system commencing in 2016,” emphasized Chief McGowan. “This is a significant enhancement to public safety infrastructure, and as we move into the expanded phase of pilot testing it will be critical to ensure the network delivers the level of performance, security and audio clarity that I know it is capable of providing for our region.”

Pilot testing started in October. Over 45 days, more than one-thousand test transmissions and scenarios will be completed. This will involve over-the-air testing in partnership with agencies, who will provide feedback prior to the project proceeding to the next phase.

The current regional radio network (used by various police, fire and ambulance personnel throughout the Lower Mainland and Fraser Valley) is being replaced with a new system based on digital radio technology known as Project 25 (P25) in the 700 MHz band. This technology is considered best in class and has been endorsed by the Lower Mainland emergency services community. P25 is being widely adopted by public safety agencies across North America.

E-Comm’s 9-1-1 call-answer services will once again be expanding over the next several months, with Primary Public Safety Answer Point (PSAP) service for central Vancouver Island and the upper Fraser Valley moving to E-Comm in November and January. When the two transitions are complete, E-Comm will be the Primary PSAP for 88% of the province’s 9-1-1 call volume, up from the current 80%.

On November 17, the City of Nanaimo and Regional Districts of Nanaimo and Cowichan Valley will transfer 9-1-1 call-answer services to E-Comm, followed on January 19 by the Fraser Valley Regional District, which will transition Chilliwack Primary PSAP services for the City of Chilliwack, Village of Harrison Hot Springs, Districts of Mission, Kent and Hope, and Electoral Areas A-H. 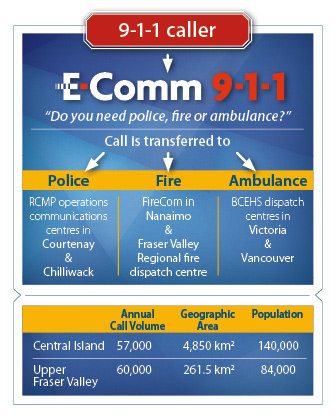 Preparations for both transitions are well underway, including development of a comprehensive project plan outlining all of the various technical and operational requirements necessary for seamless changeovers. The project plan includes a training program to familiarize staff with the geography of the new service areas.

“E-Comm provides the best option for the Central Island 9-1-1 partnership both technically and operationally, particularly as the overall 9-1-1 system in Canada evolves in the future.”

In announcing the move, Nanaimo’s manager of Police Support Services, Mike Dietrich, commented on the rigorous process the City of Nanaimo and Regional Districts of Nanaimo and Cowichan Valley undertook when evaluating the Primary PSAP portion of the Central Island’s 9-1-1 services.

“The independent study concluded that E-Comm has the ability to handle large spikes in incoming 9-1-1 call volume due to the size of the centre and its staffing model,” Dietrich said. “Combined with its built-in redundancies, we agree that E-Comm provides the best option for the Central Island 9-1-1 partnership both technically and operationally, particularly as the overall 9-1-1 system in Canada evolves in the future.” 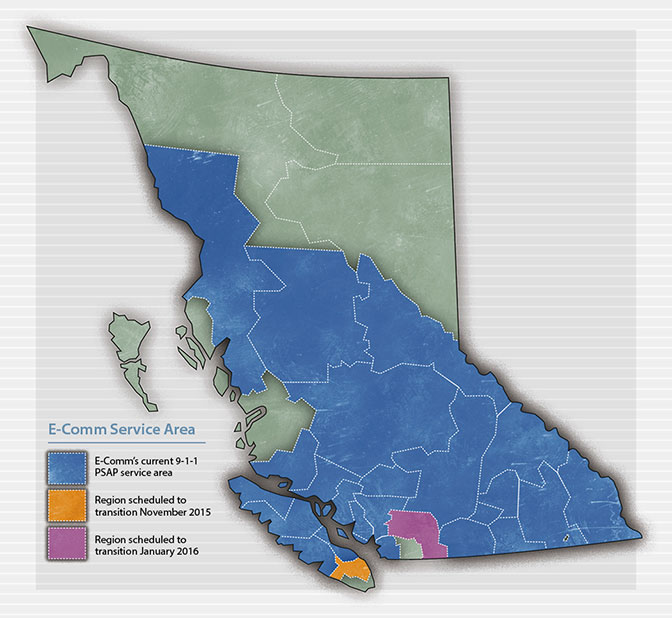 For residents in the two regions, the change will be seamless. For the Central Island, police calls will be answered by E-Comm and transferred to the RCMP at their North Island dispatch centre in Courtenay, fire calls will continue to go to Nanaimo, and ambulance calls will be routed to BC Emergency Health Services (BCEHS) in Victoria. For callers in Mission and the Upper Fraser Valley, E-Comm will transfer police and fire calls to Chilliwack RCMP and fire dispatch centres, and ambulance calls to BCEHS in Vancouver.

E-Comm CEO David Guscott said consolidation offers many benefits, including shared staffing and technology costs which result in economies of scale and increased operational effectiveness for all. “We are very pleased with our new public safety partnerships and are committed to ensuring residents in all our service areas continue to receive high-quality, responsive services 24 hours a day.”

E-Comm’s 2014 non-emergency public education campaign recently received top honours from one of Canada’s premier print and online publications, Applied Arts Magazine, for a public safety video that formed part of the campaign. The video, Brother/Bicycle, was awarded Best TV Ad, Public Service Announcement. This is one of the visual communication industry’s most prestigious award programs of creative excellence and E-Comm’s work was selected from hundreds of entries from more than 26 categories in TV, radio, print and online.

“The video dramatically illustrates the true purpose of 9-1-1 and we are so pleased it has been recognized for both its creative approach and the important message it portrays.”

The video first ran in 2014, and will be featured again in an upcoming public education campaign this November.

“The video dramatically illustrates the true purpose of 9-1-1 and we are so pleased it has been recognized for both its creative approach and the important message it portrays,” remarked Jody Robertson, E-Comm’s Director of Corporate Communications. “We can’t wait to build on the success of last year’s campaign with another powerful new element this fall, as part of our continued efforts to educate the public and provide them easy access to their local non-emergency number.”

The sudden and unexpected fierce windstorm that blew through Metro Vancouver on August 29 has been described as the worst in a decade for power outages and damage. It also caused the single largest surge in 9-1-1 calls in a compressed timeframe in E-Comm’s 16-years of operation.

At the storm’s peak, E-Comm staff fielded more than 600 calls in one hour. Over the course of the afternoon, the call volume topped more than 1,800– more than triple that of a typical Saturday. Because of the size and scope of the E-Comm consolidated centre, on-duty managers were able to quickly assign additional resources to help with the influx of calls.

In mass calling events such as this, there are two things that can occur: busy signals and recorded announcements. Busy signals happen when there is congestion on the 9-1-1 network and as a result, calls do not reach the 9-1-1 centre. Recorded announcements occur once a call has reached a 9-1-1 centre, but the number of calls outnumbers the available call-takers.  In the case of a busy signal, callers should hang up and keep trying if they have an emergency. In the case of recorded announcements, callers are advised they have reached 9-1-1 and to stay on the line as their call will be answered as soon as possible.

Due to the huge number of 9-1-1 calls staff were answering on the day of the storm, E-Comm used social media to ask people to refrain from calling 9-1-1 unless they had a true emergency, as staff were being inundated with non-emergency calls. On the day of the storm, staff were receiving in addition to emergencies in need of first responders, calls reporting power outages, asking for restoration information or reporting damage posing little or no risk to public safety.

9-1-1 systems are designed for individual, day-to-day emergencies where immediate action from police, fire or ambulance is required because someone’s life, health or safety is in jeopardy, there is smoke or fire or a crime in progress. Although E-Comm is a large, consolidated communications centre able to scale up resources when needed, mass simultaneous calling such as this will create congestion as staff attempt to transfer 9-1-1 callers to the agencies they have requested.  9-1-1 is a system that has many facets and involves many partners, each with a role to ensure its effectiveness.

“As part of our post-incident review process launched immediately after the windstorm, we’ve been discussing the impacts with TELUS, the 9-1-1 network provider for most of British Columbia, and our emergency service partners,” says Doug Watson, vice-president of Operations. “We’re examining a number of potential technical and operational changes that might help to provide increased service to the public in these rare, but massive call volume situations in the future.”

Personal preparedness and public education are also key.  “We have all seen the effects of disasters like hurricanes Sandy and Katrina and earthquakes around the world,” Watson explains. “We all need to prepare ourselves for these situations as emergency services are going to be heavily burdened and telecommunications and power outages are anticipated.”